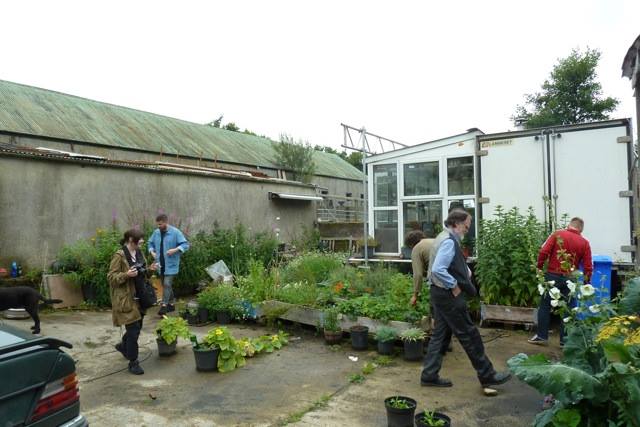 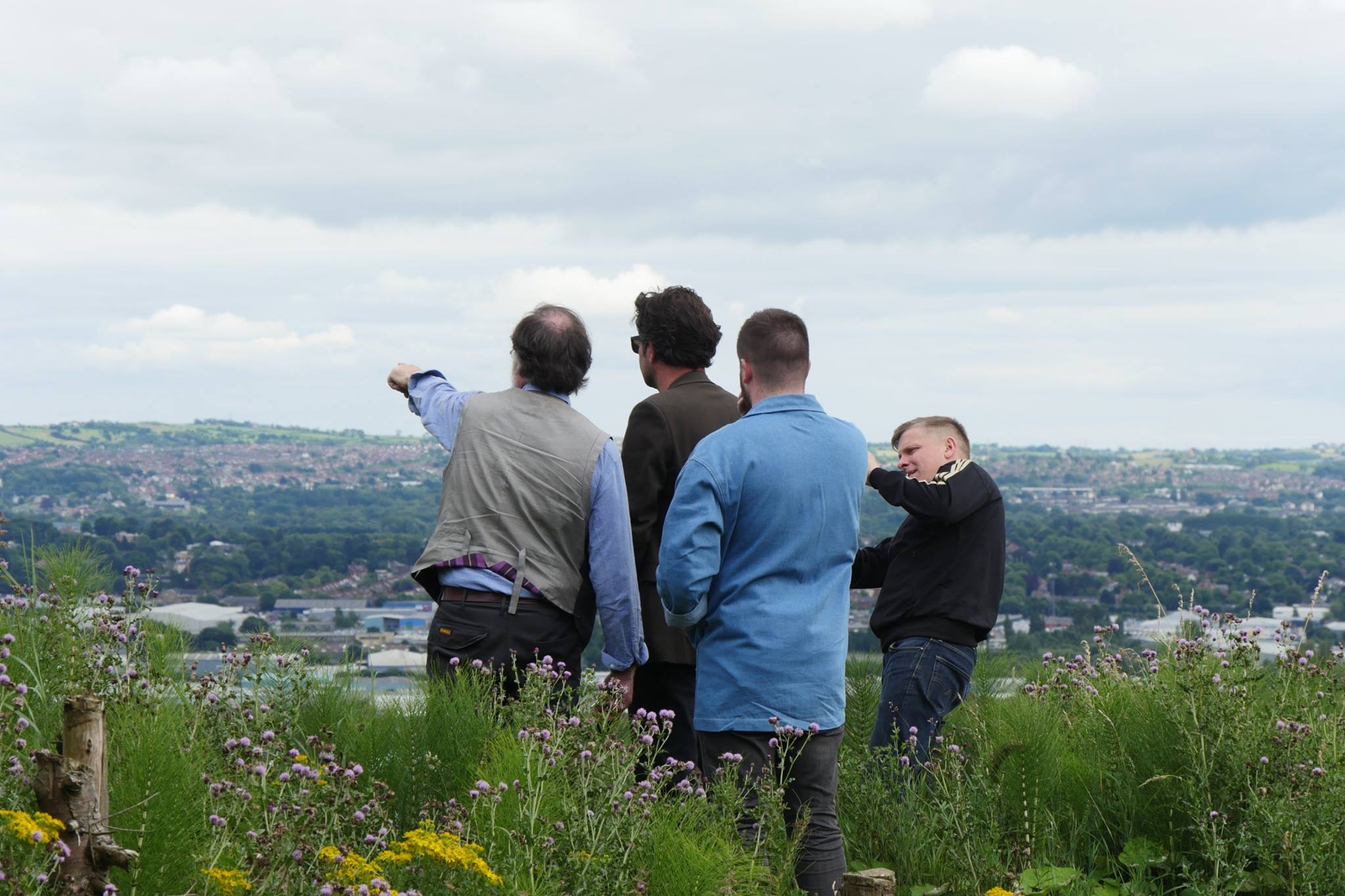 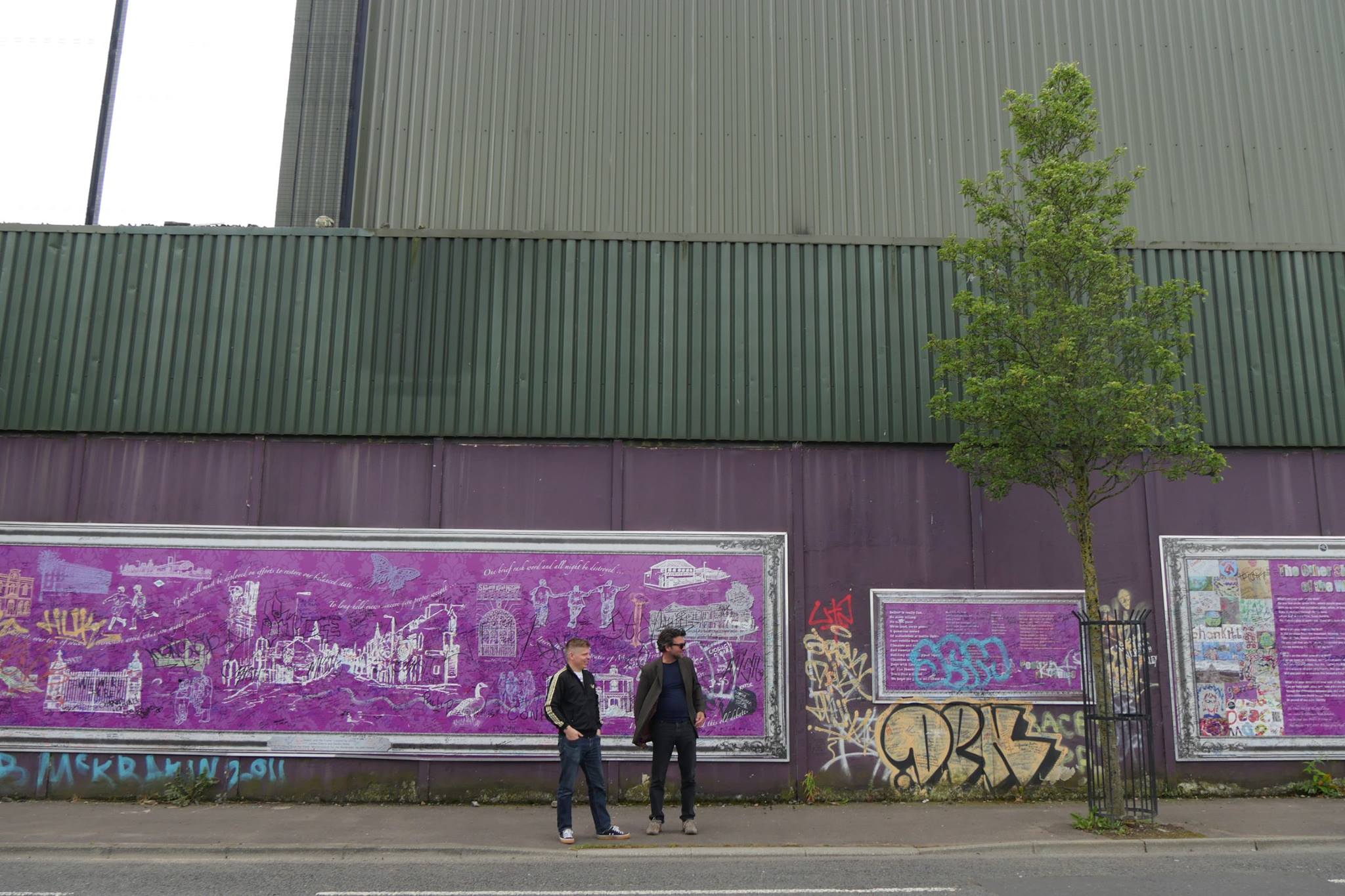 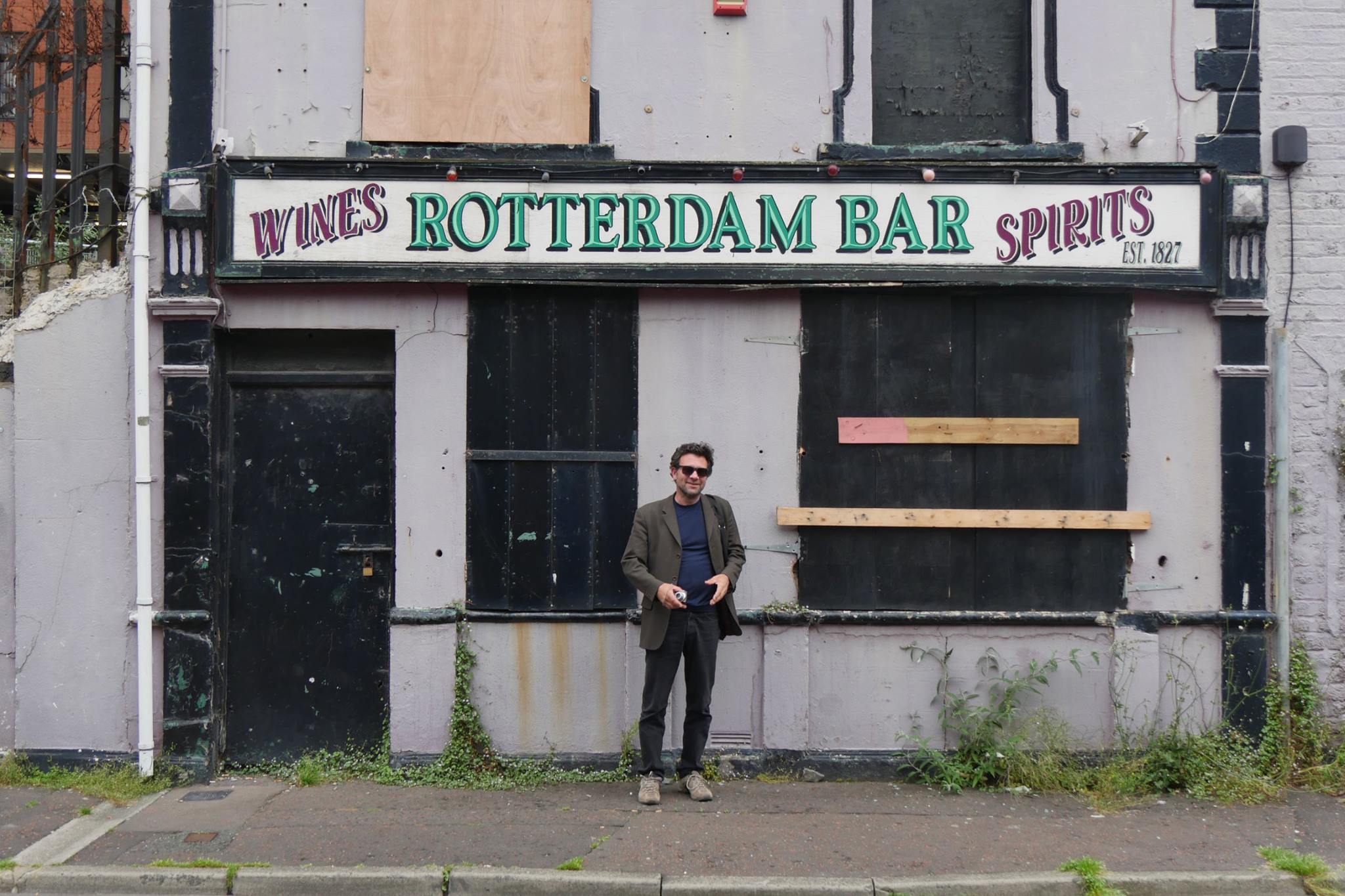 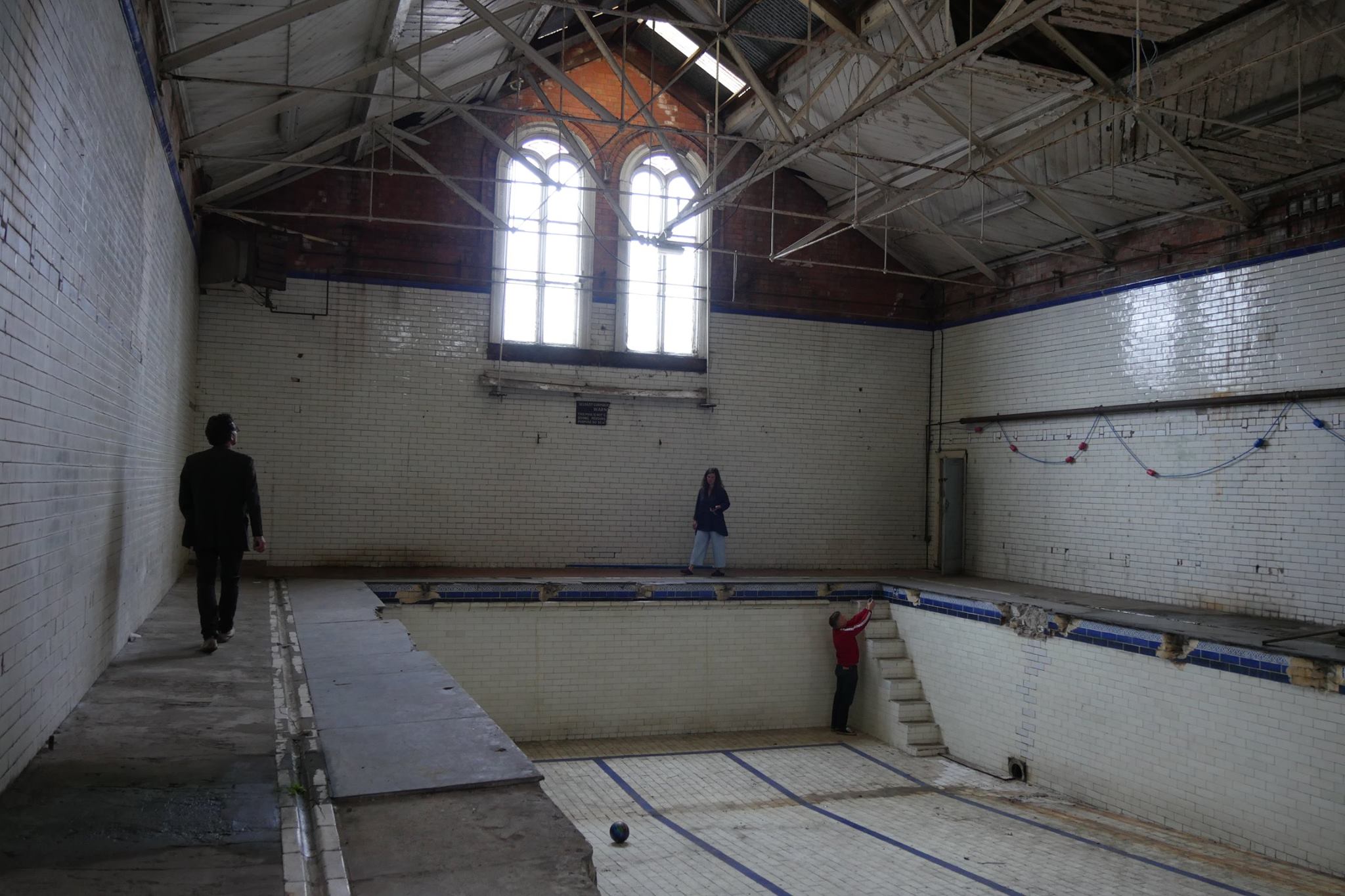 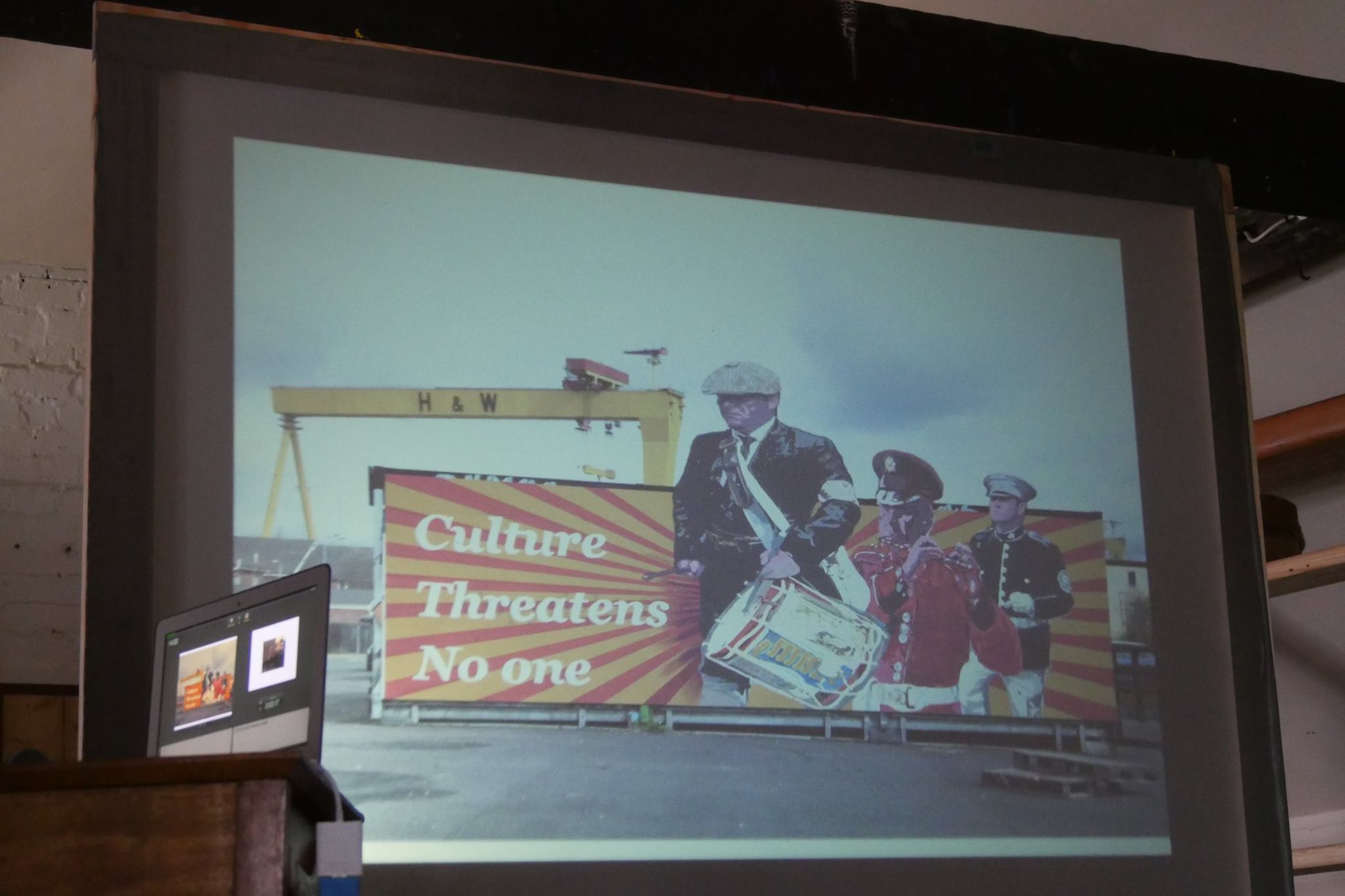 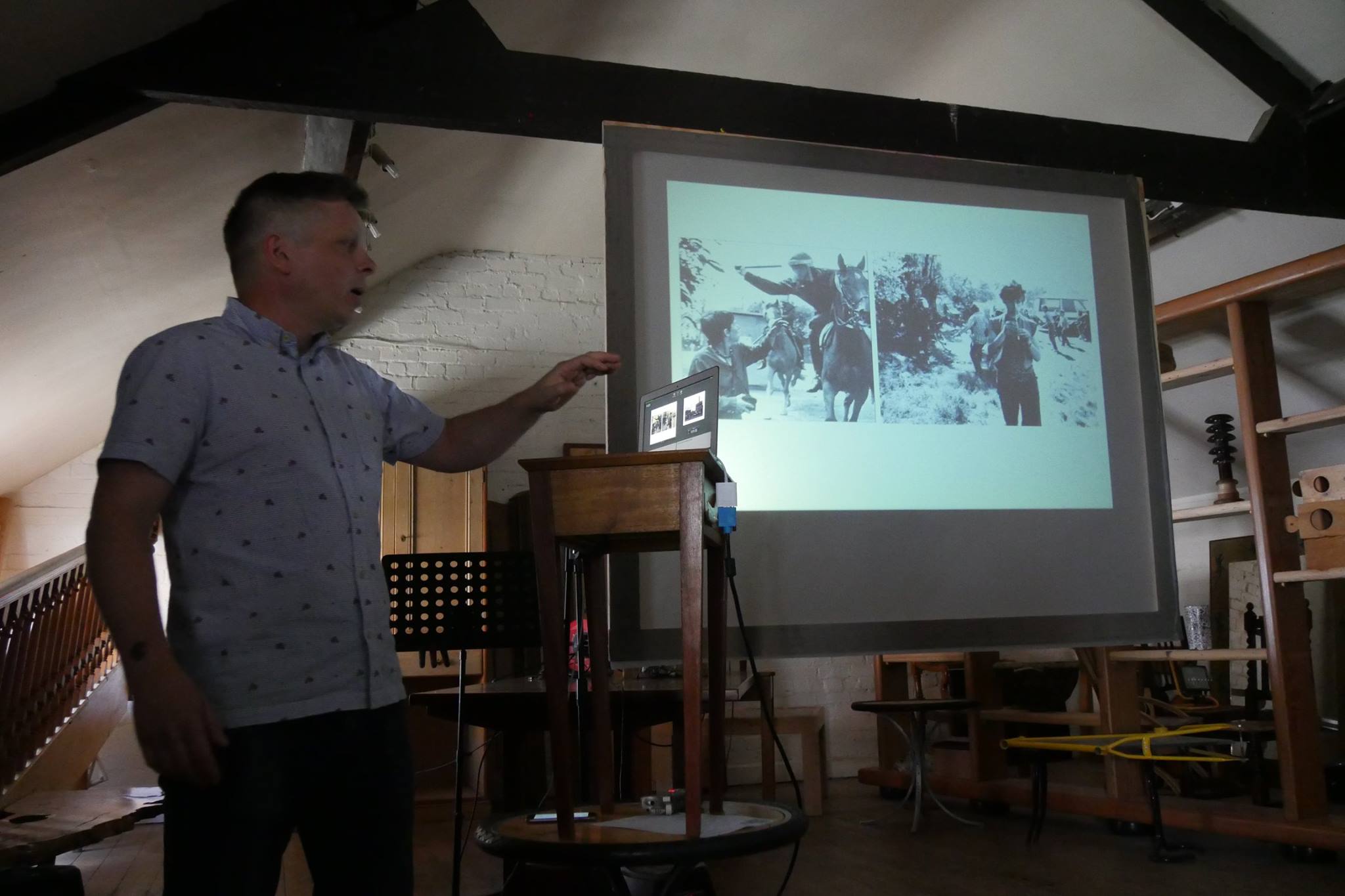 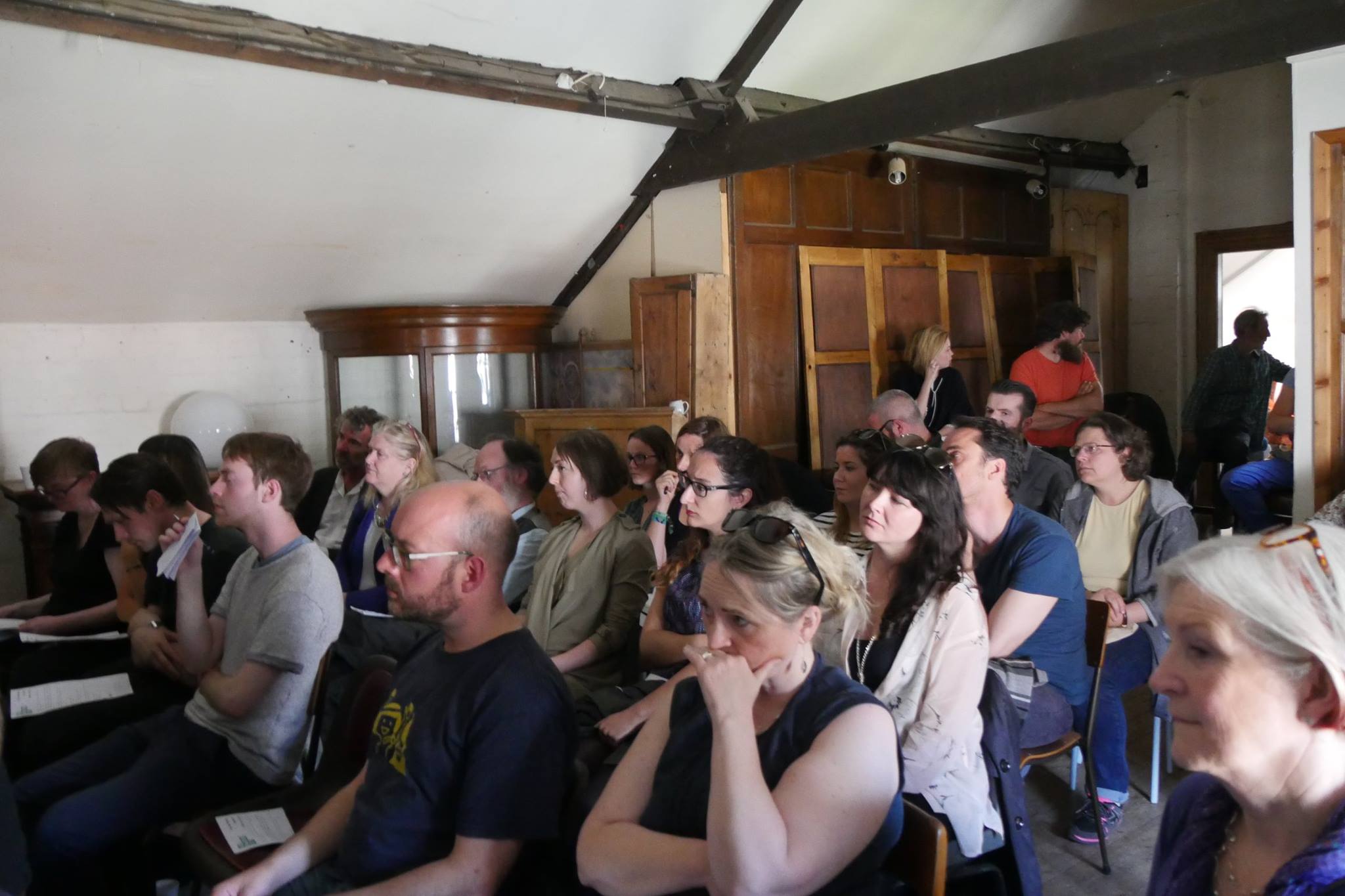 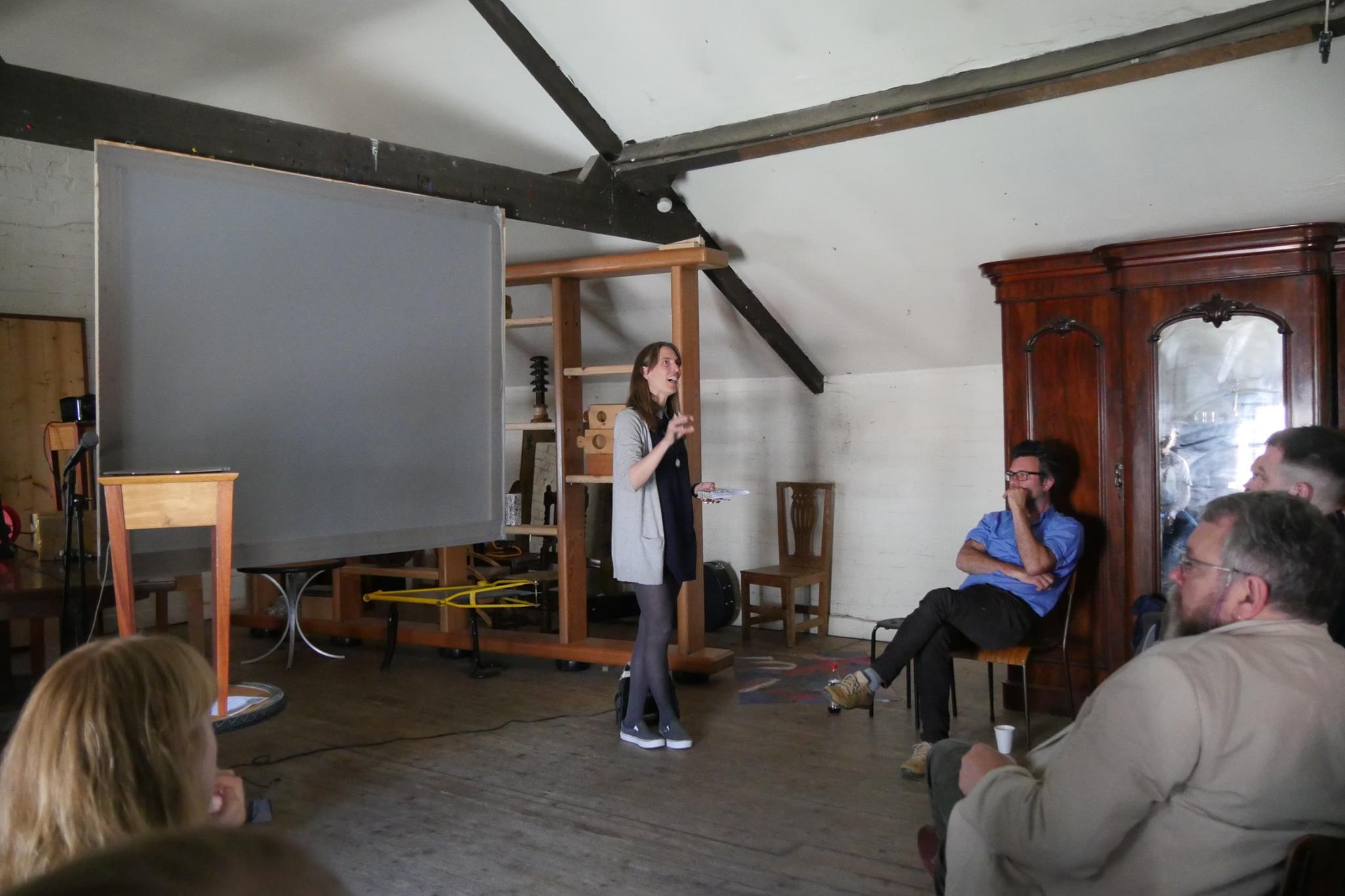 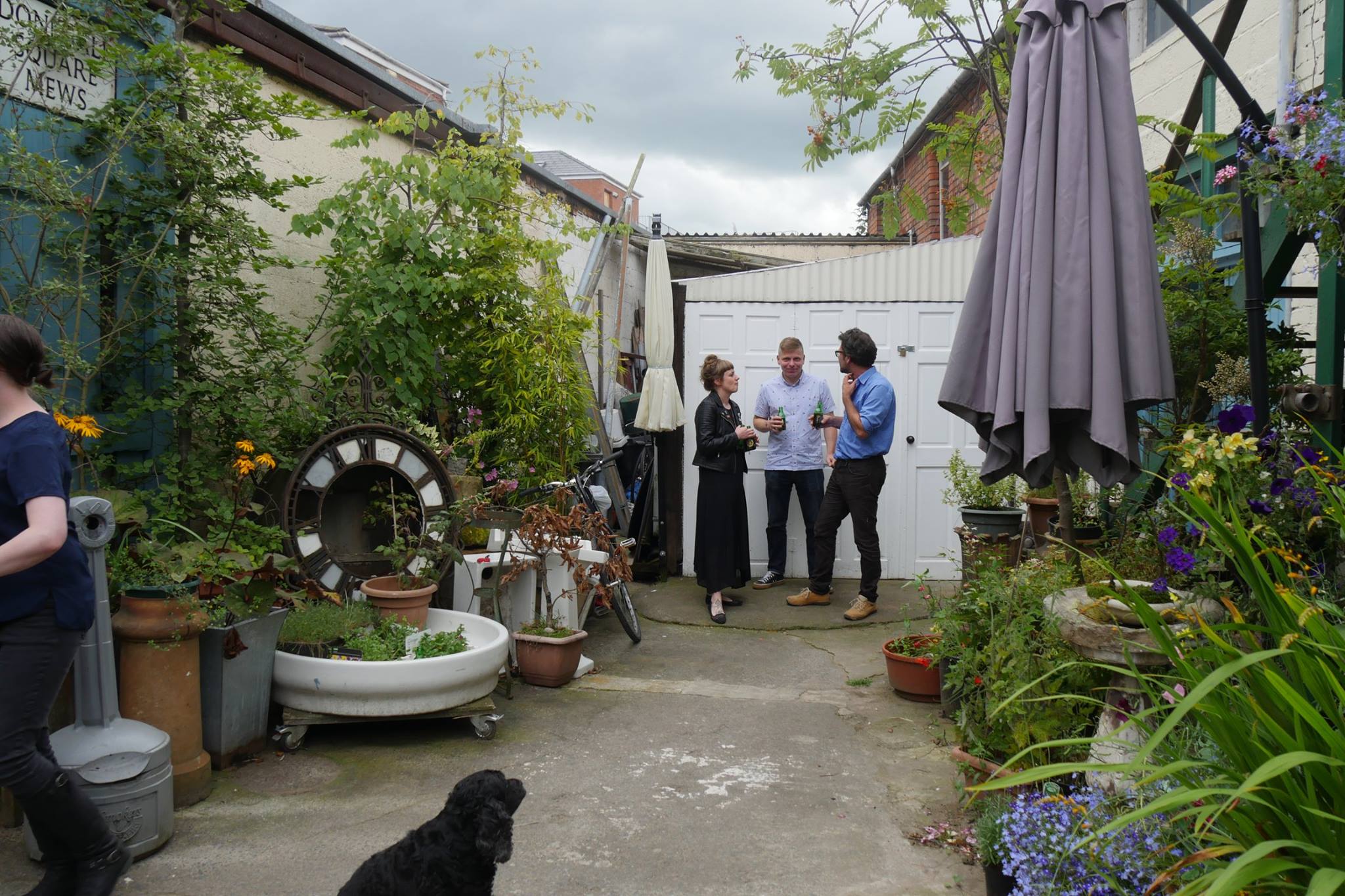 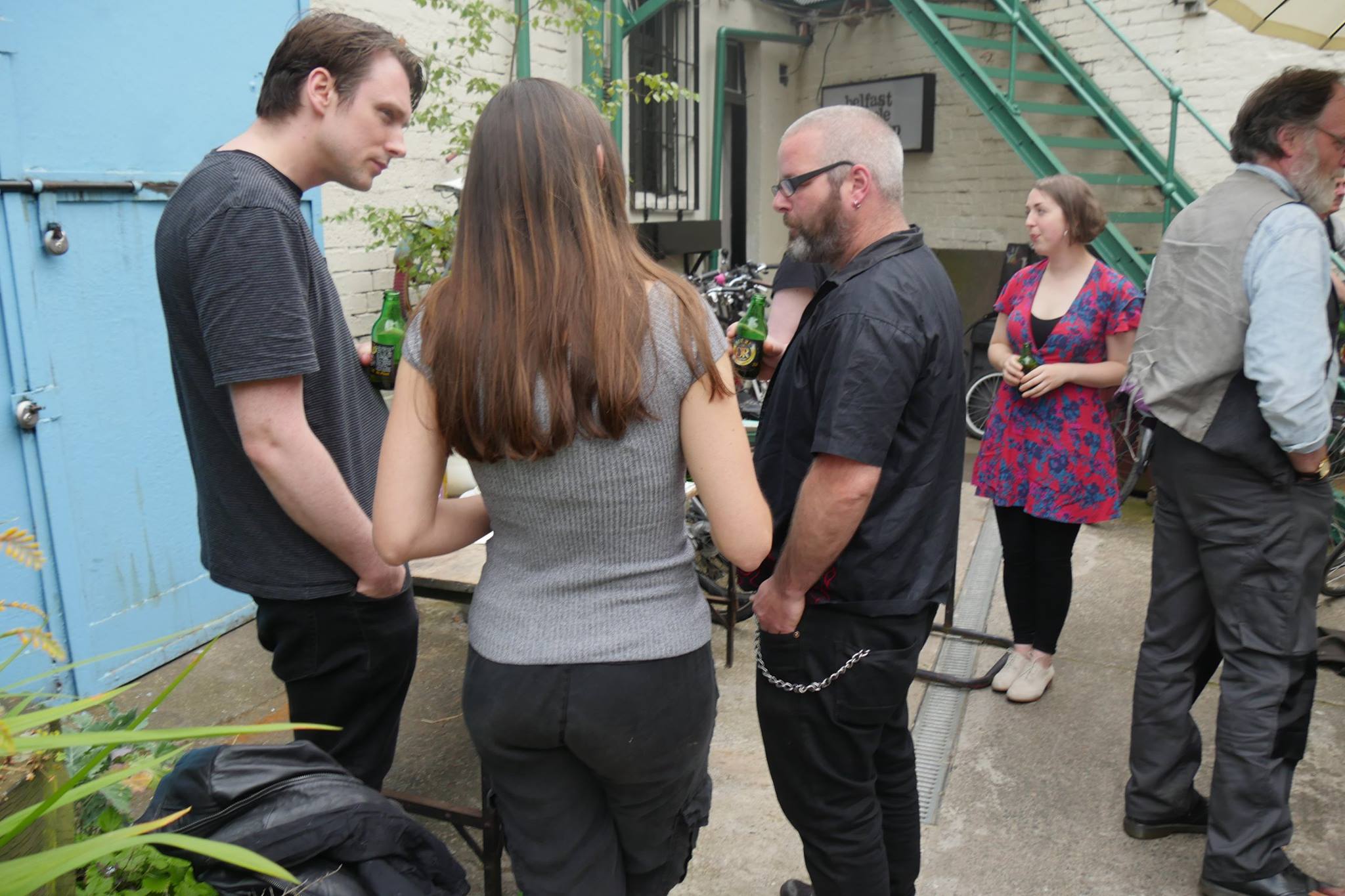 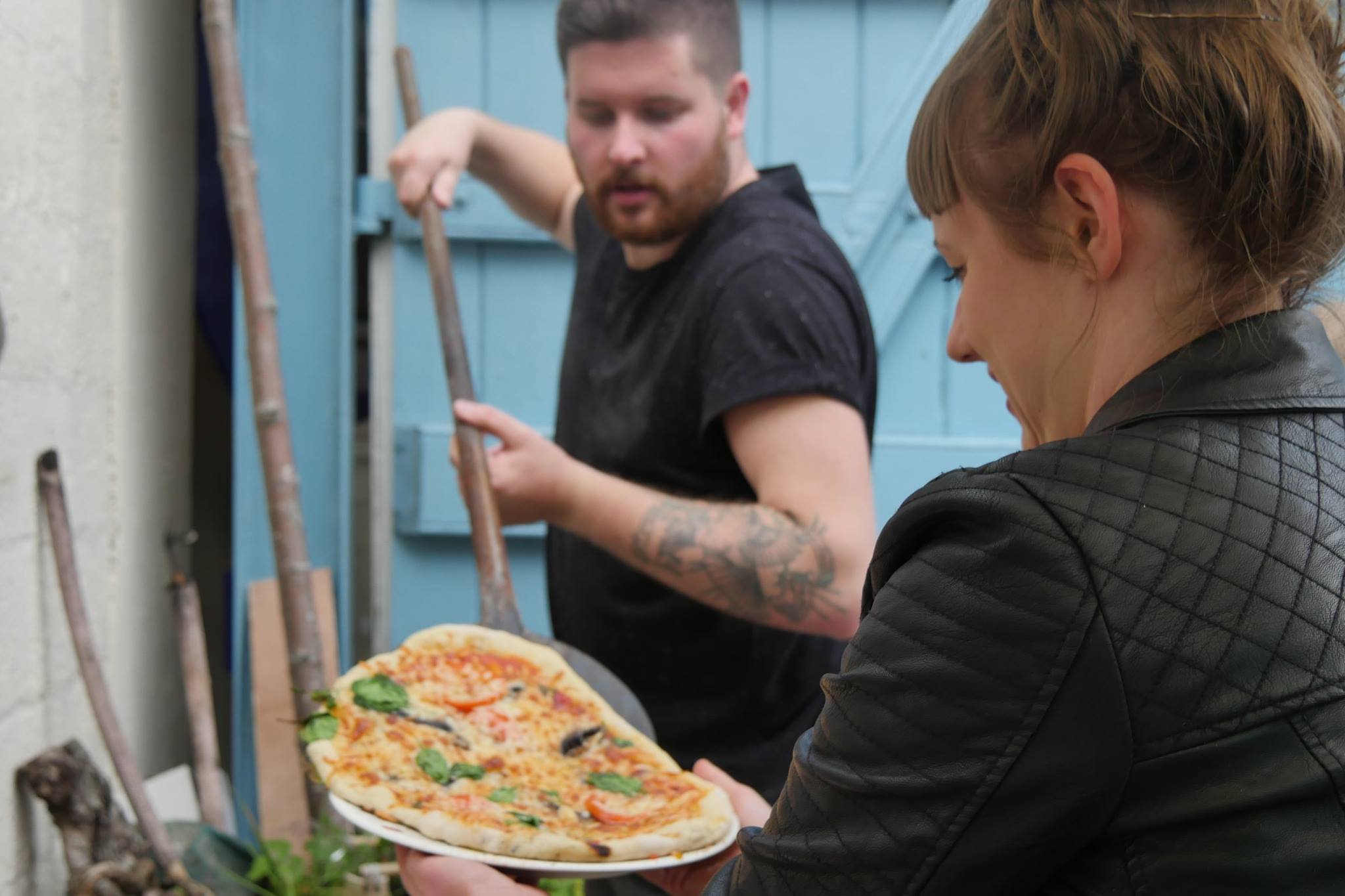 Our two international guests, Kamiel Verschuren and Jon Wakeman, arrived in Belfast a few days before the event in order to experience first-hand the reality of the urban landscape that (creative) communities live within in Belfast. In advance of the talks at Lawrence Street Workshops we visited and met with representatives in the following spaces and places:

– Shelter NI: We undertook a housing tour of the city over the course of an afternoon, drawing attention to the uniquely fractured landscape of Belfast, and how housing in the city has developed since the Troubles: from social housing to independent and alternative housing initiatives.

– Flax Studios: We visited this studio group to speak with manager Gail Prentice about the organisation’s findings of their recent feasibility study, conducted with a view to purchasing their own building for artists to work in.

– The Bath House at Templemore Baths: We visited The Bath House to discuss the embedded cultural activity taking place at this location –where local and international visual artists are in residence at the leisure complex – and learn more about how they operate in an otherwise contentious part of East Belfast.

– Skainos Centre: We held conversations with various stakeholders at this multifaceted institution, examining how they serve a number of ‘publics’ and how they realised the building with a host of environmentally sensitive innovations.

– Paddy Bloomer’s self-built house: We conducted a site visit to a unique dwelling on the outskirts of Belfast, where the artist Paddy Bloomer has built his own home from scratch using recycled materials that can easily be adapted and transported into a variety of locations and contexts.

During the Living & Working Economies: Artists in the City talks, Kamiel Verschuren delivered a presentation showing the timeline of the development and revitalisation of an area in south Rotterdam, delivered via innovative public art projects and low-cost housing schemes for artists. The south of Rotterdam is considered the poorest area of this city, with a quickly increasing population and rising unemployment rate. It is cut off from the rest of Rotterdam, with physical barriers such as the River Maas as well as social and psychological barriers such as the area’s high, often unintegrated, immigrant population and historically high crime rates.

At NAC Foundation, Verschuren has created an alternative economy to employ, fund and house artists in a specific area of Rotterdam. The city’s housing association provides the NAC foundation with rent-free housing in run-down parts of south Rotterdam. Artists and creative practitioners pay a low rental charge to NAC per month to live in these properties, providing NAC with an annual income from approx. 100 rentals. This agreement allows rents to remain low and affordable for artists and creative practitioners but also generates an internal, self-sustaining funding structure. NAC pays the resident artists to undertake the renovations of their respective rented accommodation themselves from the money collected from rents and equates to a substantial annual public investment in the neighbourhood per year.

By demonstrating the monetary value of the work carried out, NAC has been able to secure match funding from local government. This income is also used for the MYA fund (Move Your Ass, Mind Your Area), where NAC resident artists can apply for money for their own artistic projects, which must demonstrate some benefit to the local community.Following Kamiel Verschuren’s presentation, Jon Wakeman, founding member of East Street Arts in Leeds, described how the organisation has grown over 12 years from a temporary art exhibition in a vacant shop to a charitable organisation with 21 staff, an organisational headquarters, seven venues, 90 studio spaces, four project spaces, a 34-bed hostel and one live/work house, located across Leeds.

East Street Arts have created a very successful alternative economy to support their artistic community in Leeds. By purchasing properties for studios they avoid paying money (both their own and cultural funding) to private landlords. This also offers security to artists in the city, whose studio groups are often leased under temporary rental agreements and find that the areas they move into are improved directly/made more desirable by the presence of artists, often resulting in them being priced out.

East Street received Arts Council, EU, and Leeds City Council funding in order to buy Patrick Studios, a process that took four years. They also run a rates relief scheme, by using their charitable status to exempt landlords from rates when they agree to let East Street use their buildings. Rates relief has been used in Belfast previously by Household to secure temporary residency projects as part of the the Cathedral Quarter Arts Festival and the studio group Platform Arts currently have a rates relief agreement enabling them to run their studio group and gallery building on Queen Street. In addition to receiving initial investment from funders, East Street Arts also charge landlords to avail of the rates relief they provide, arguing they are providing a service by not only allowing private property owners to save on rates but also often adding value to the building through renovation and positive use.
Following the talks, Household served refreshments at Lawrence Street Workshops.