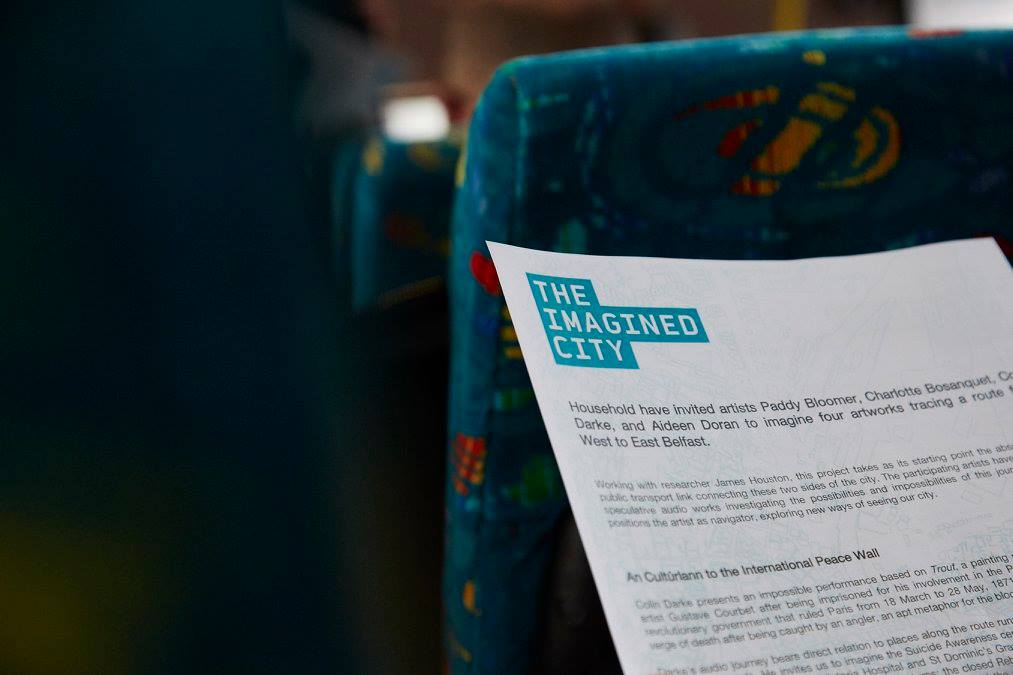 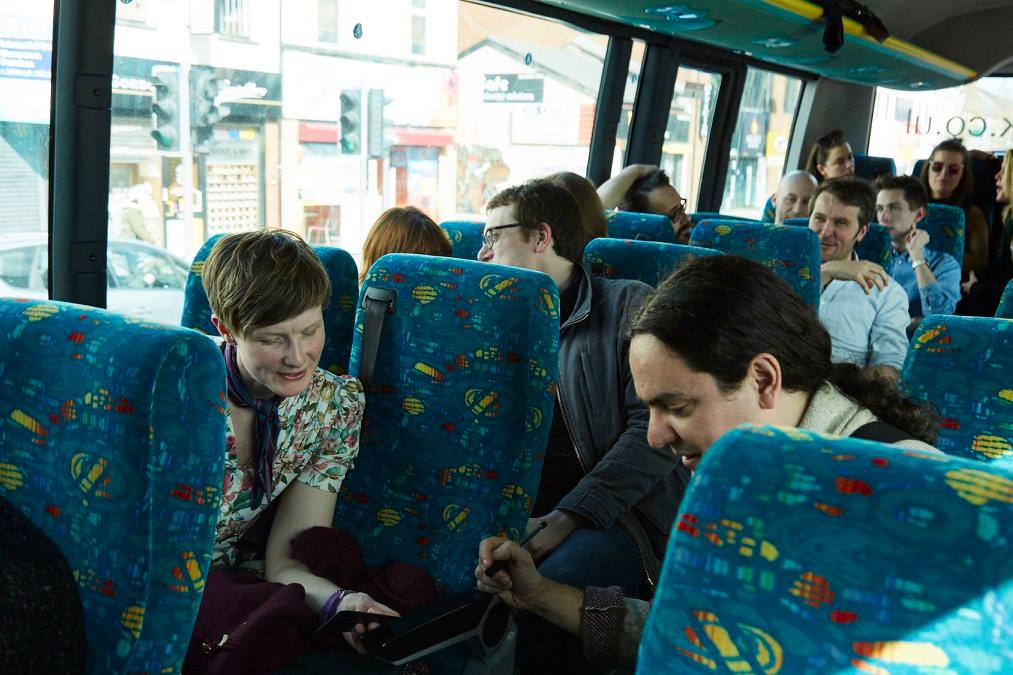 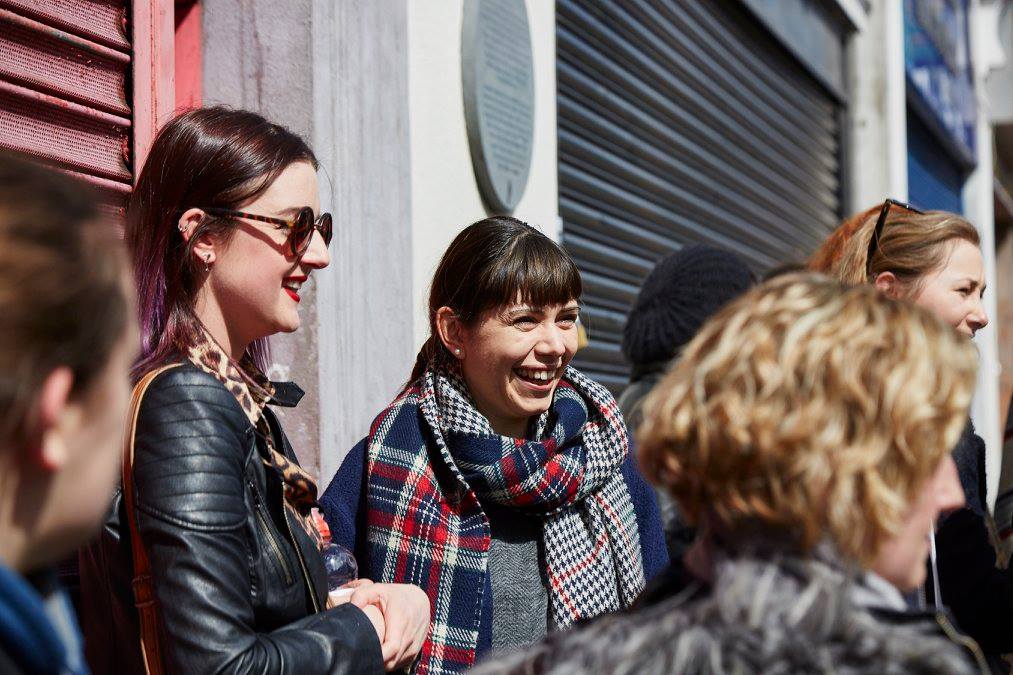 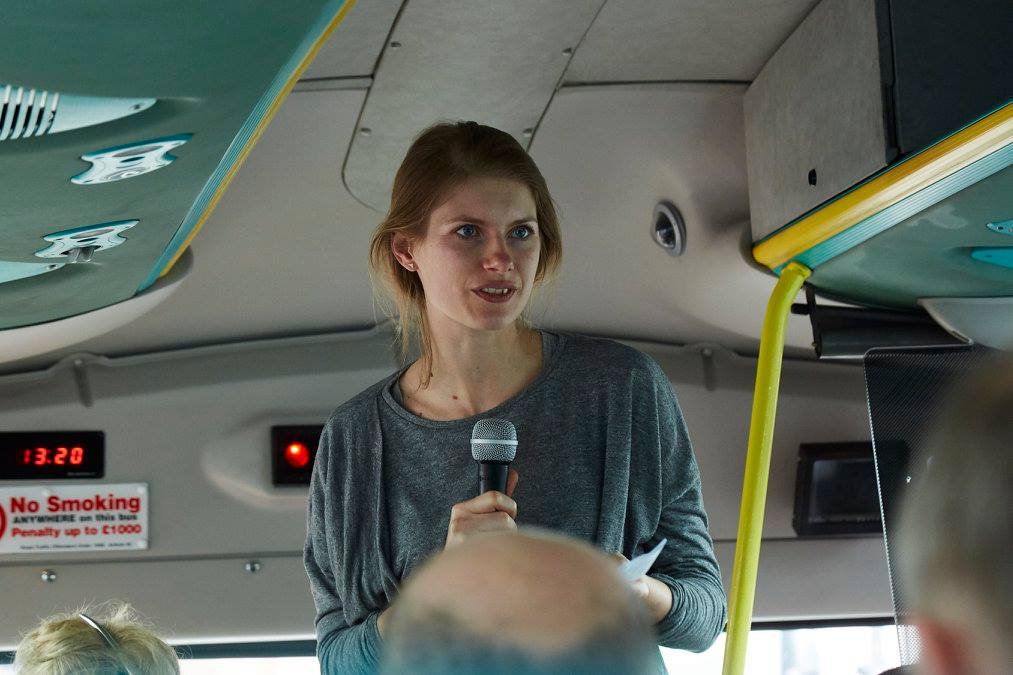 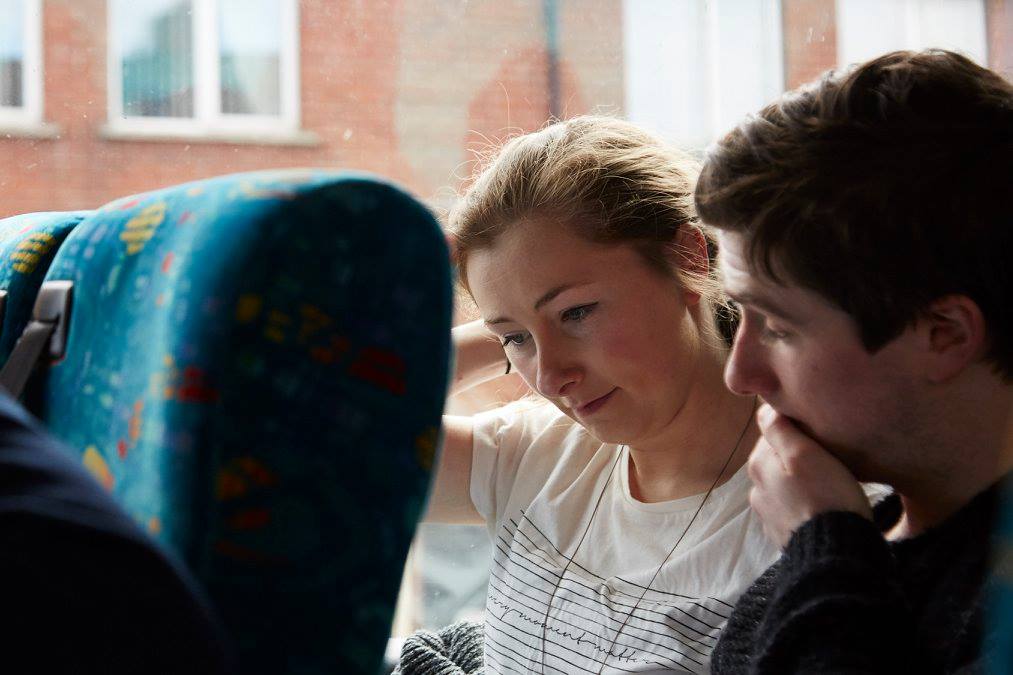 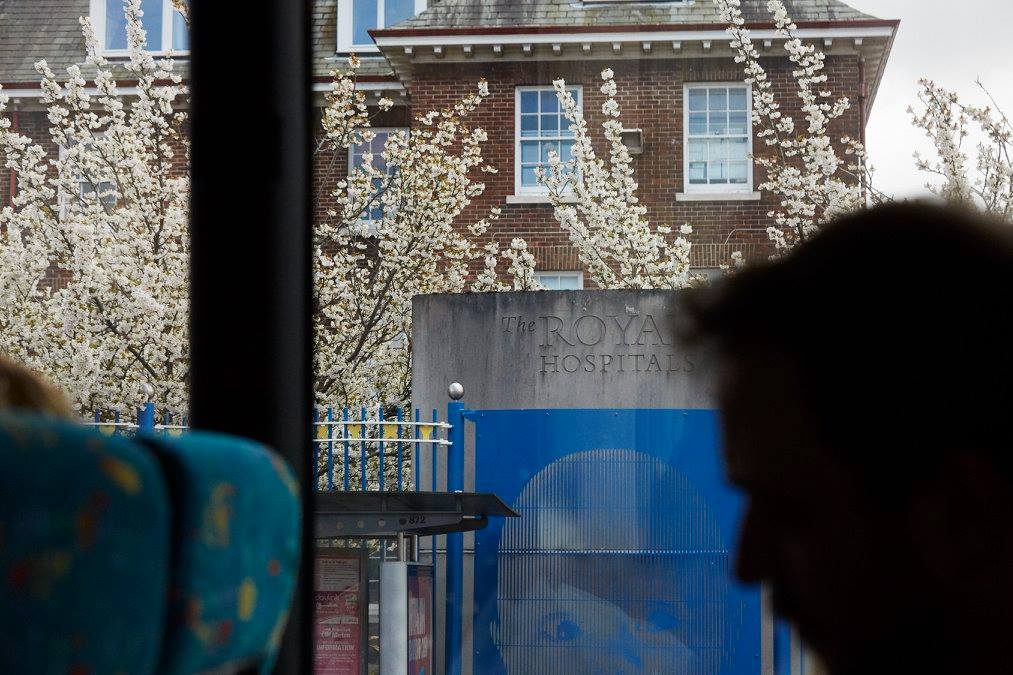 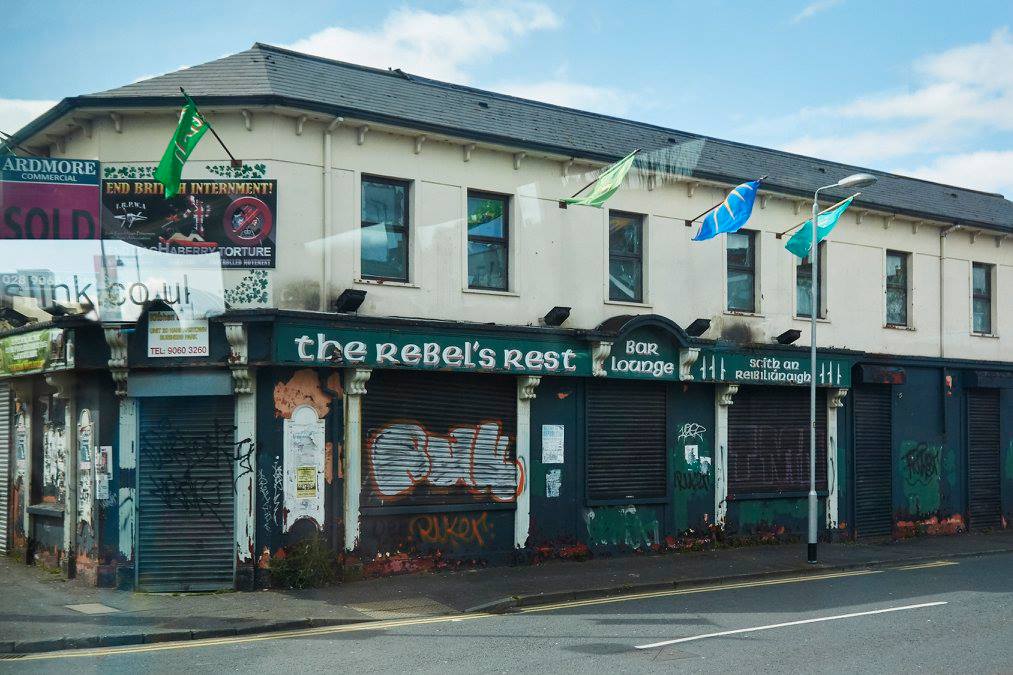 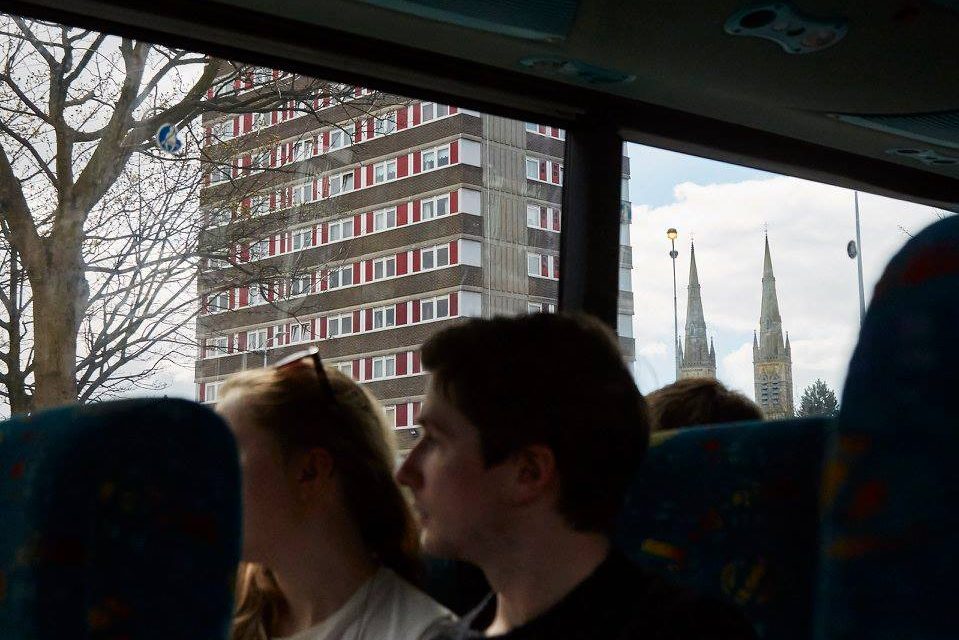 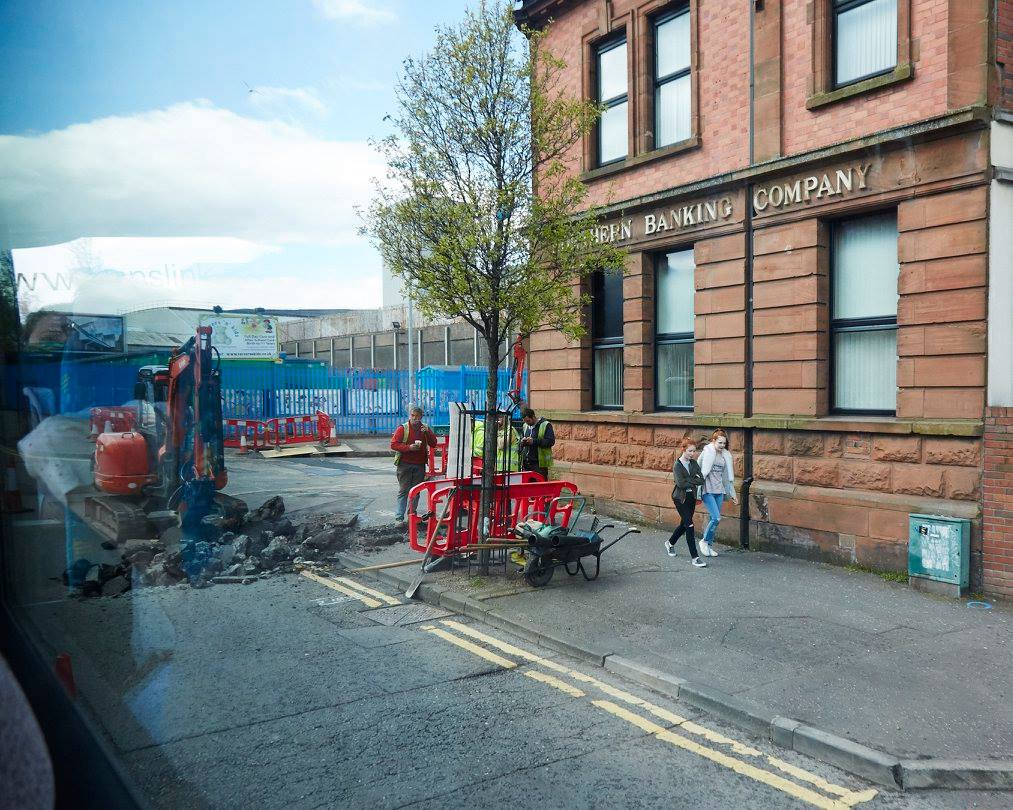 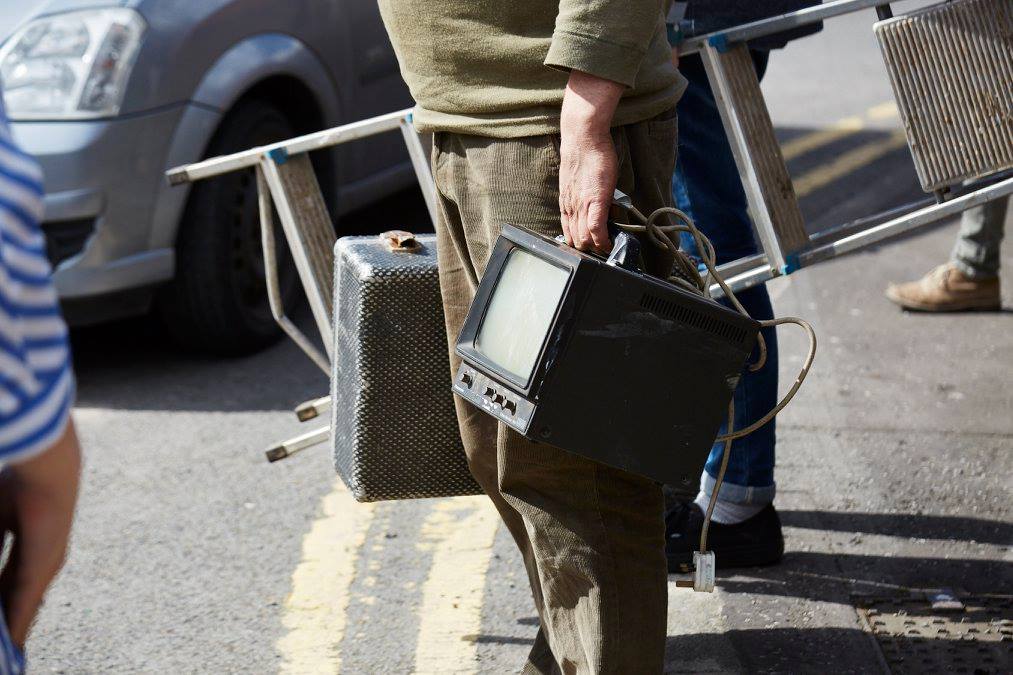 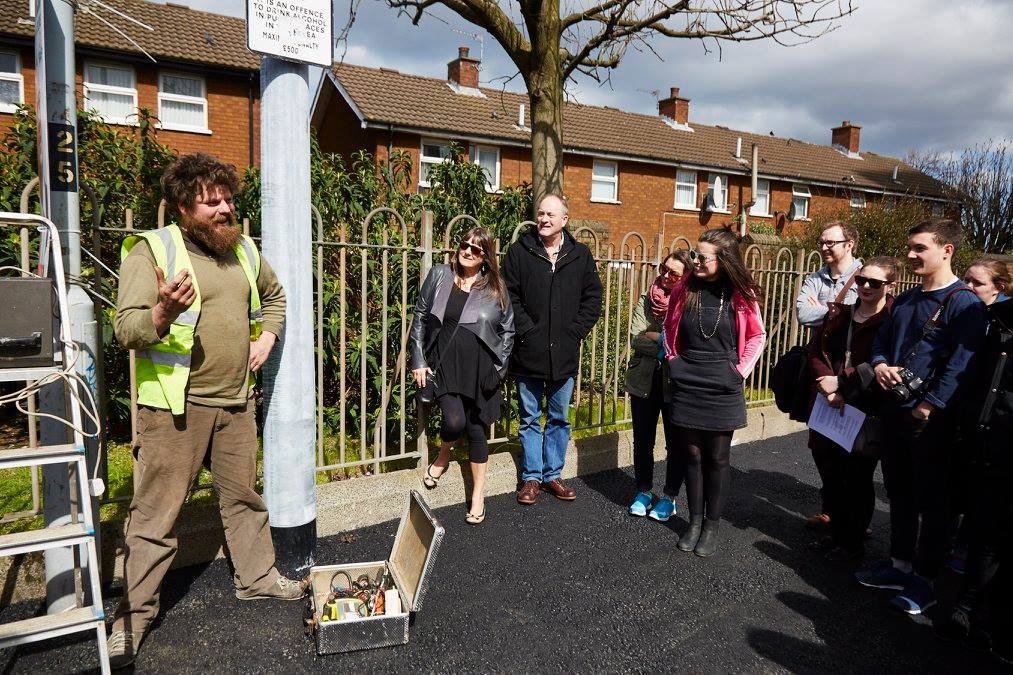 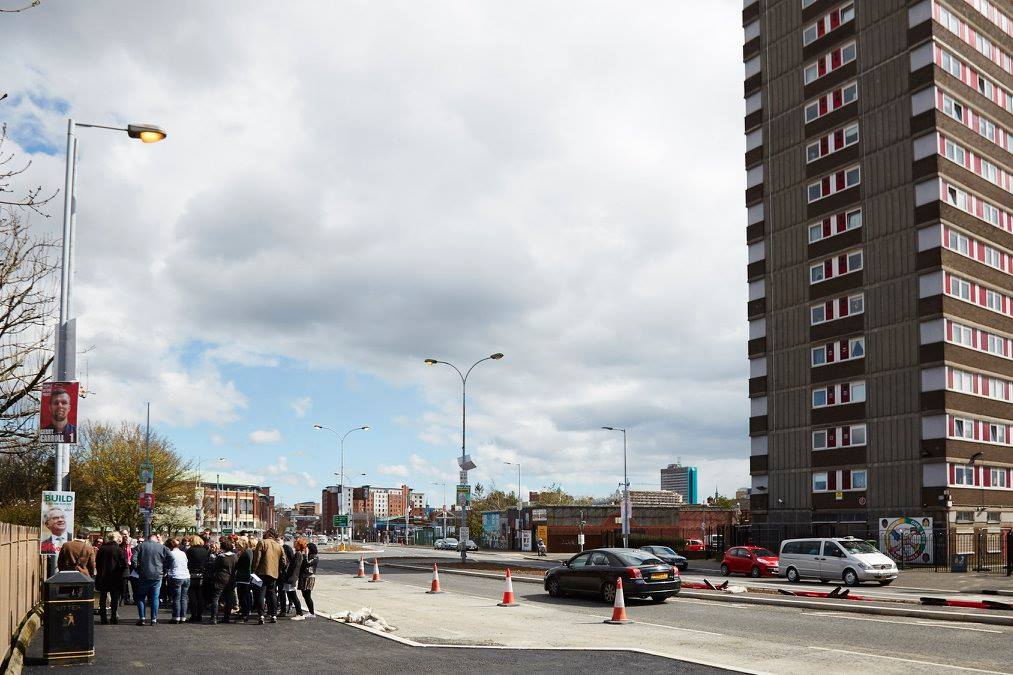 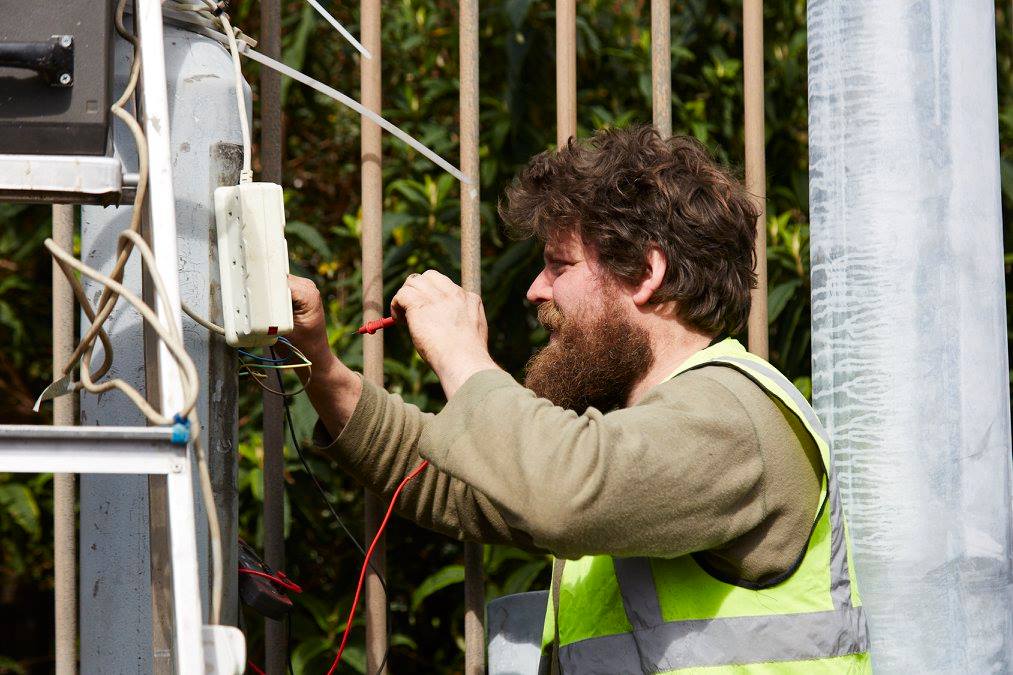 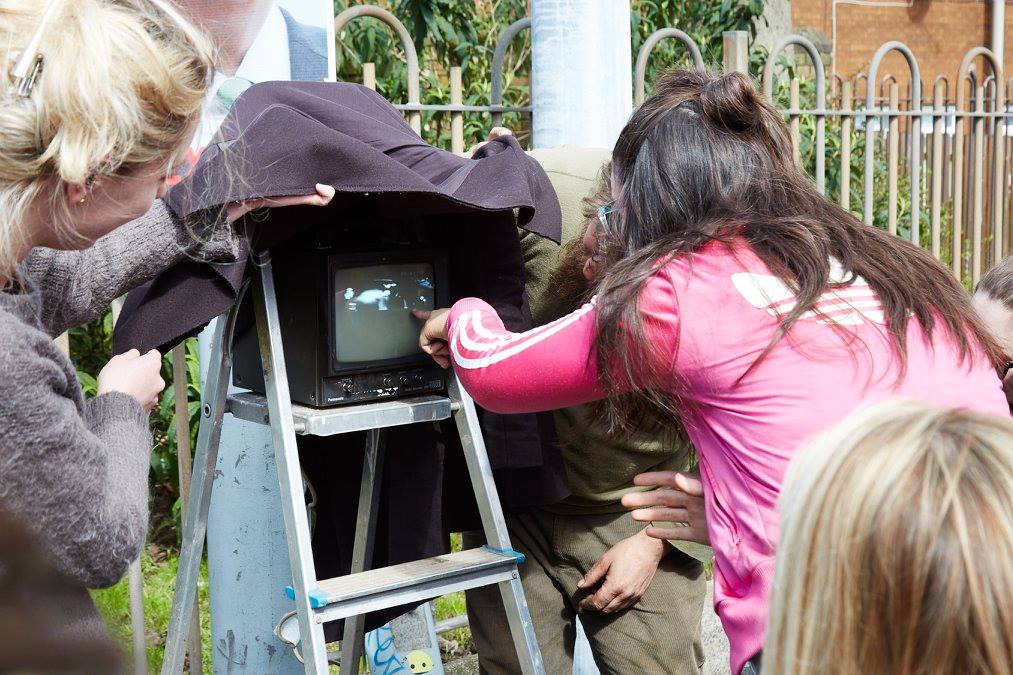 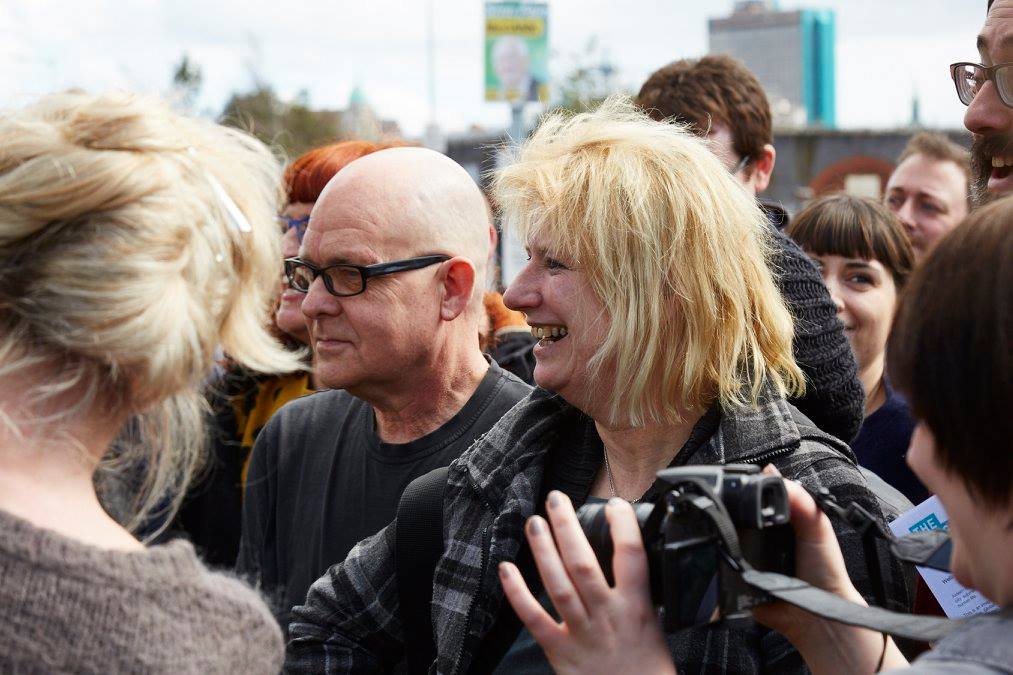 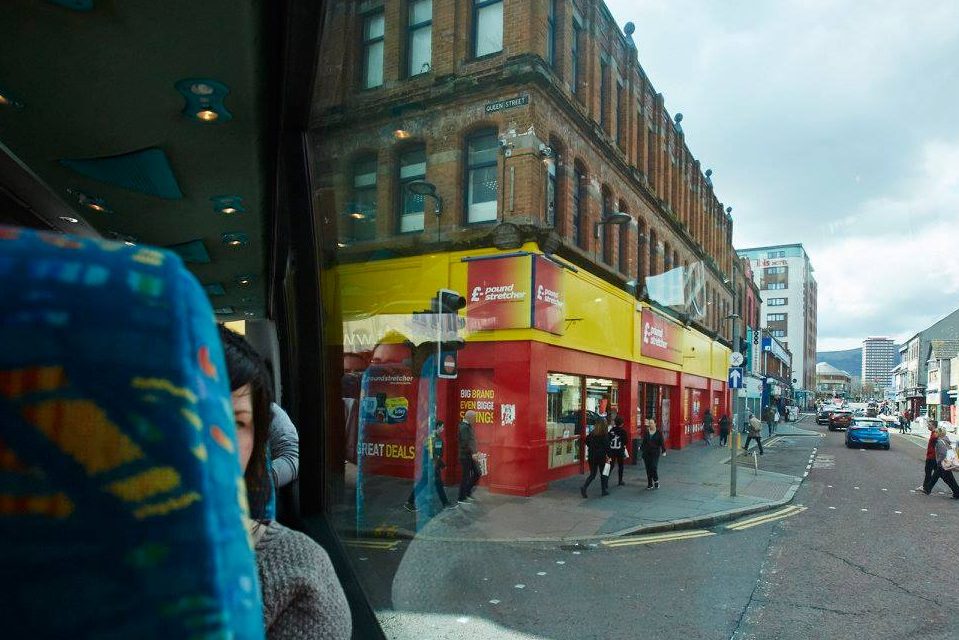 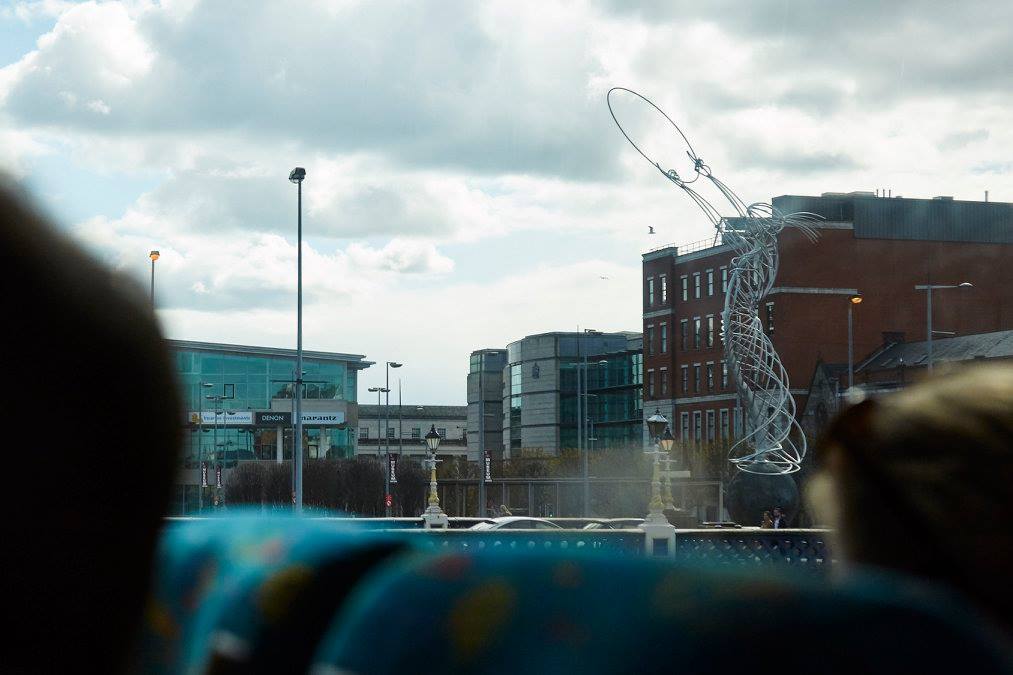 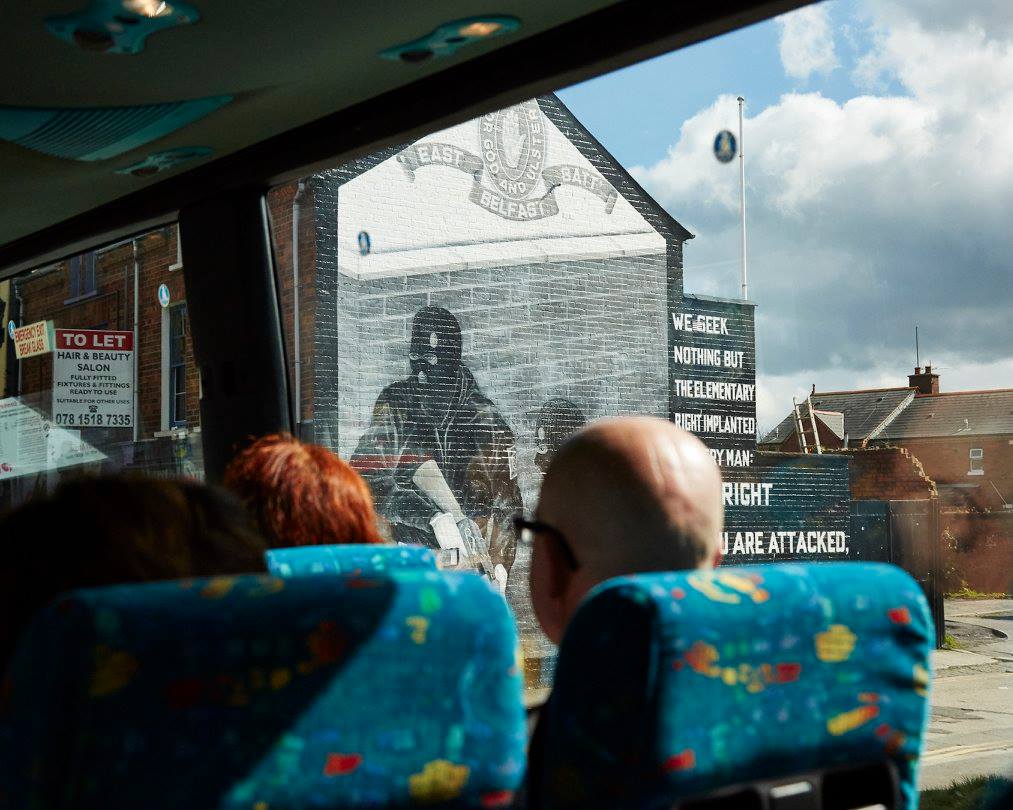 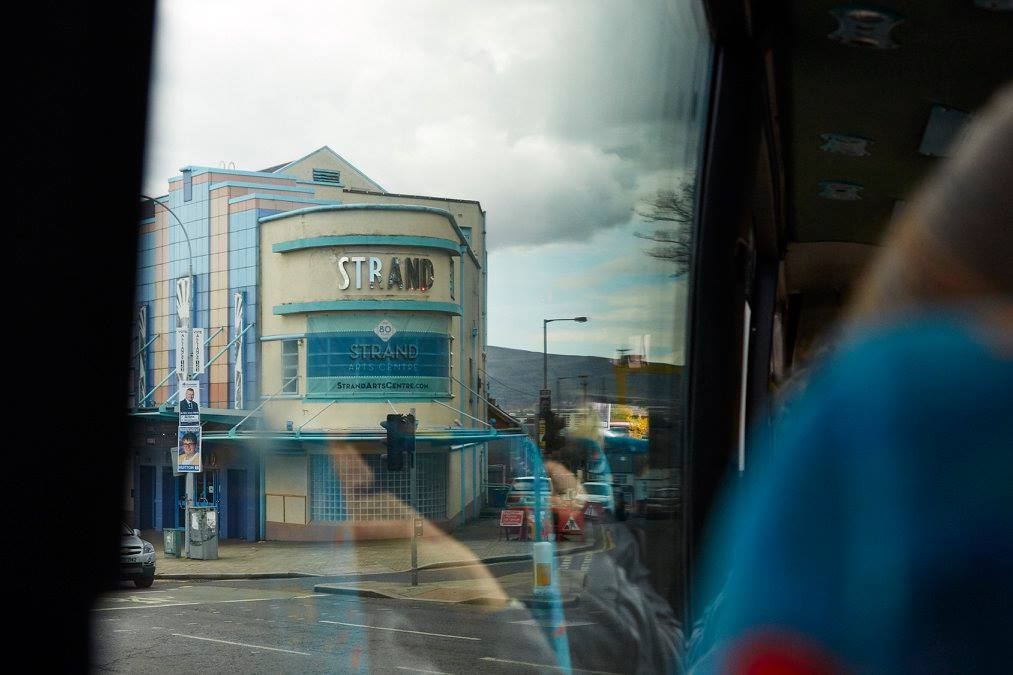 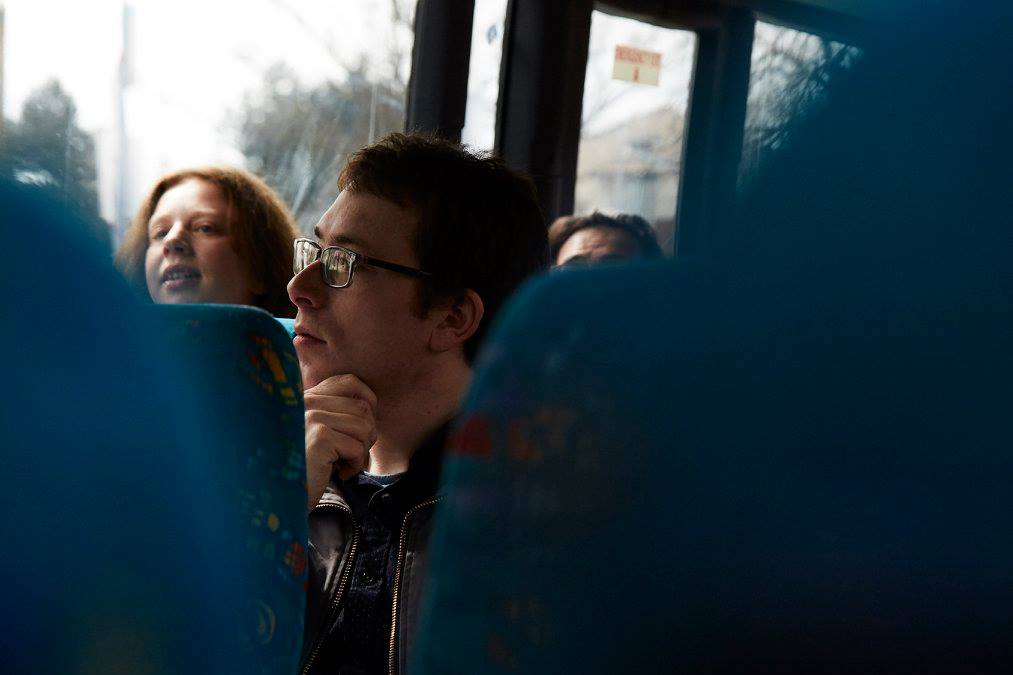 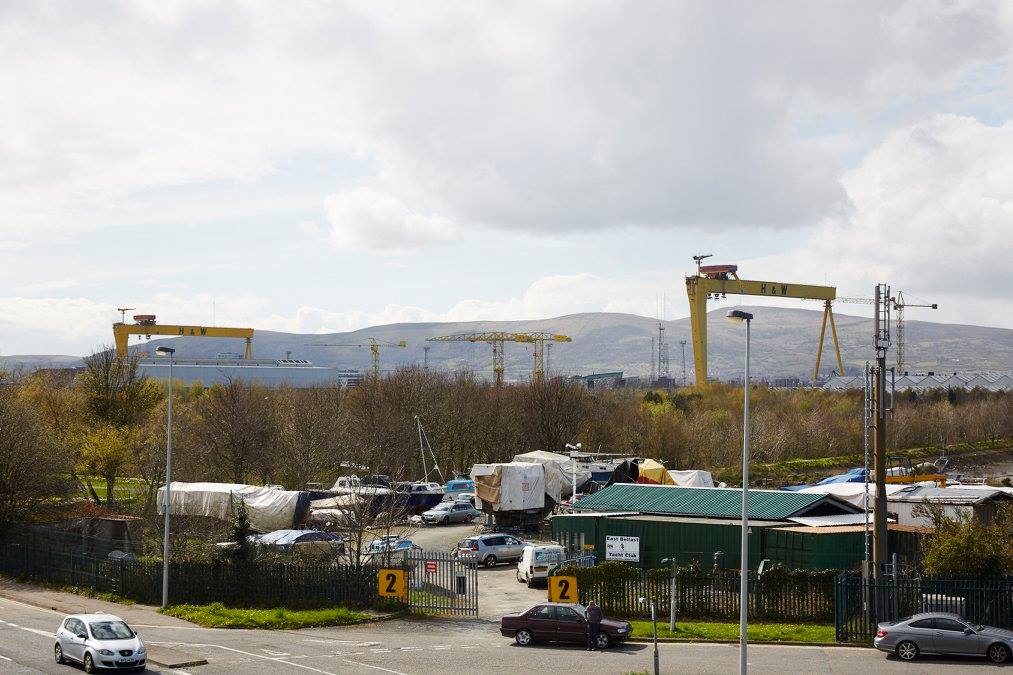 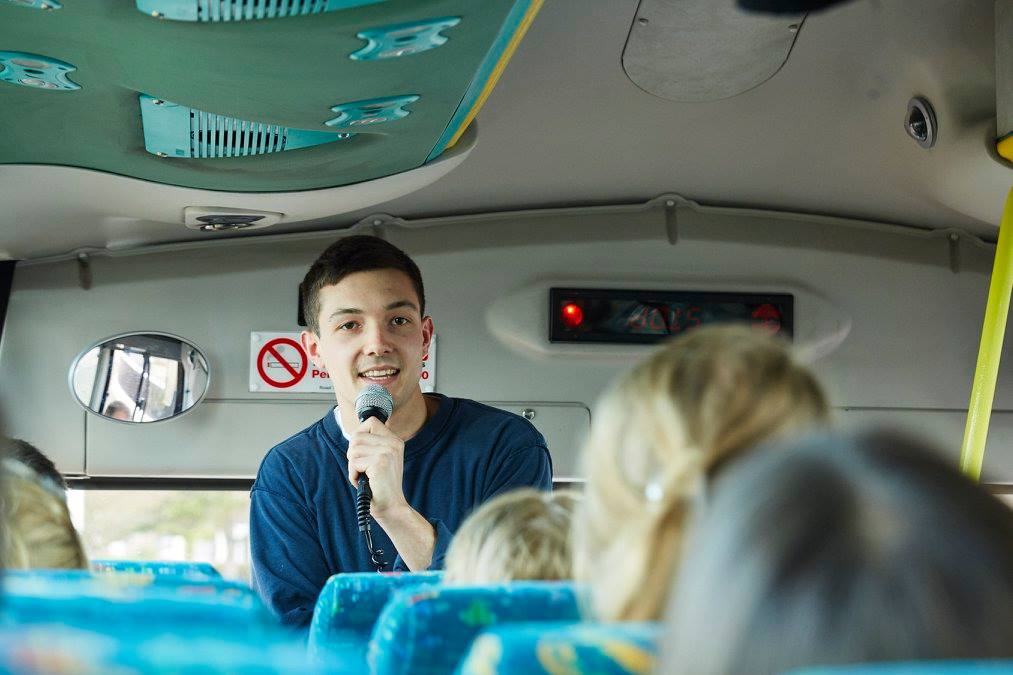 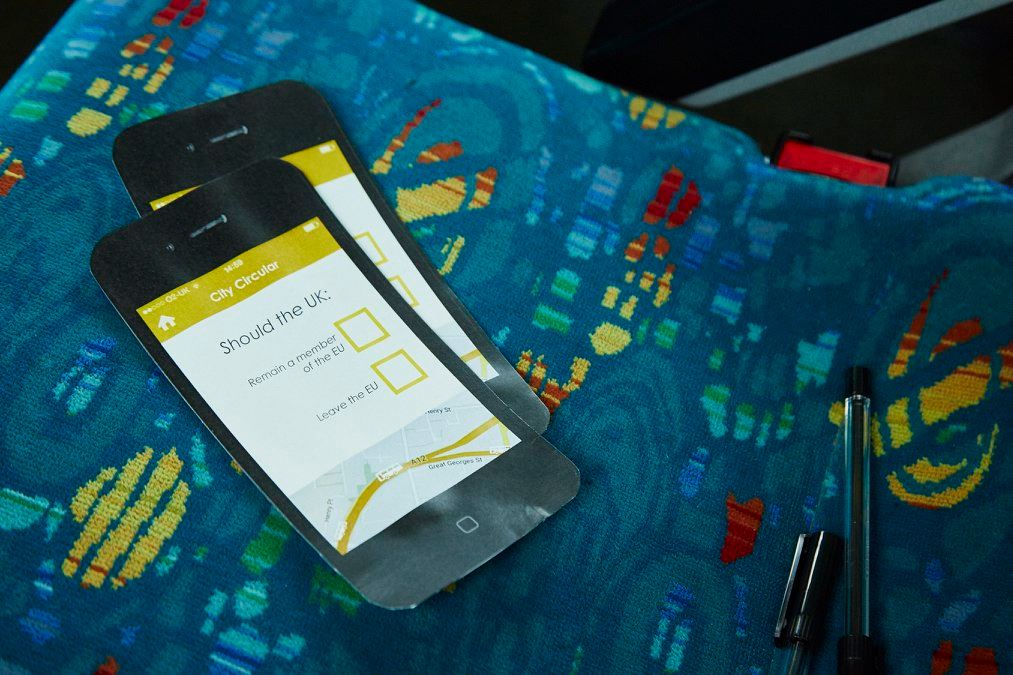 Working with researcher James Houston, this project took as its starting point the absence of any public transport link connecting these two sides of the city. The participating artists created four speculative audio works investigating the possibilities and impossibilities of this journey. The audio was played to an audience on a bus following the route mapped by the four artists in their works. ‘The Imagined City’ bus tour positions the artist as navigator and proposes new ways to explore Belfast.

This event feeds into Household’s overall 2016 public programme ‘The Imagined City’, which considers the role of art and artists in urban environments.

You can listen to the four works below. More information about each piece can be found in the drop-down menus.

Colin Darke presented an impossible performance based on Trout, a painting made in 1872/73 by the artist Gustave Courbet while imprisoned for his involvement in the Paris Commune, a radical socialist and revolutionary government that ruled Paris from 18 March to 28 May 1871. It depicts a trout on the verge of death after being caught by an angler, an apt metaphor for the brief and bloody uprising.

Darke’s audio journey bears a direct relation to places along the route running from the Culturlann to the Falls Road murals. He invites us to imagine the Suicide Awareness centre; the Beehive bar; St Mary’s University College; the Royal Victoria Hospital and St Dominic’s Grammar School; the AOH building; Bobby Sands Mural and the Library relief sculptures; the closed Rebel’s Rest bar; the Jobs & Benefits building, Falls Leisure Centre and the Two Spires shops; and the murals as ‘characters’ as his script unfolds.

Paddy Bloomer invited participants to imagine the subterranean infrastructure of Belfast, telling the tale of several attempts to find a route from West to East of the city via drains and culverts (an underground pipe structure) – an almost impossible task in a city built on a bog.

Over fifteen years ago, accompanied by his fellow explorer Nicholas Keogh, Bloomer entered Belfast’s underworld via the Blackstaff culvert by the side of the Westlink near the Donegall Road, an entrance which has since been blocked up due to redevelopment. Here they encountered muck, detritus, Willie McCrea vinyl records, potentially poisonous fumes and unimaginable sounds. Wading towards a light at the end of a tunnel beneath what could be Divis flats, they are confronted with a gaze from the city above, the source of which to this day remains a mystery.

Aideen Doran invited listeners to suspend their disbelief completely to envision a dystopian future Belfast as a city submerged – a ruin within a murky lagoon, rich in marine flora and fauna but long vacated by human life.

This is an imagined city where asking questions about the potential future for public art is an extraneous exercise. Global warming has reached its inevitable conclusion: sea-levels have risen uncontrollably, the oft-forgotten River Farset has bubbled up from beneath and subsequently swept away High Street, the Lagan has long ago burst its banks, and now, centuries after the Deluge, tourists are taken on subaquatic tours of the area to look for traces of a once-great (but catastrophically short-sighted) ancient civilisation. In this new world, the concept of ‘art’ as we know it, as with the concept of what is ‘public’ has changed so dramatically as to be almost unrecognisable.

Doran’s hallucinatory future vision of the city is notably influenced by 1970s science-fiction literature, in particular texts such as J G Ballard’s The Drowned World, where a natural disaster causes a world constructed by mankind to transform into a brutally primitive landscape of unknowable possibilities.

Charlotte Bosanquet revisited an idea that she proposed to the art space Satis House in 2012. Her proposal involved building a scaffold on the side of the building (a domestic house) which would remain for the duration of the show, offering a new view of and from the house and that could be used for a range of activities during the exhibition. The terms of this proposal being rejected as a viable exhibition were based on the potential danger it might cause to those visiting it or living in the house.

The artist used this example as a starting point to question the increasing limitations imposed upon artworks in the public realm and examine the ever-changing threshold of what is considered a risk and what is considered safe for audiences as they encounter an artwork.

The Imagined City and City as a Gallery is funded by Belfast City Council.